With finals just around the corner now it is exciting to hear that our other Aussie star, Lily Brazel, will be back in the FHC colors within the coming weeks. Based in Perth at the Australian Institute of Sport’s hockey campus, Lily has just been to Europe again with the national squad, called up to bolster the squad through their bronze medal game at the recent women’s world hockey cup.

In honour of our two national representatives, Ben and Lily, a substantial new display of their national uniforms has now been mounted in the centre of our trophy cabinet display area. Check out the different materials and styles evident over the 60 year time gap in-between Ben and Lily’s national service.

Huge congratulations to Carly James and Olivia Colasurdo who have gained selection in the Australian National Junior Squad! A terrific achievement and testament to all the hard work put into their hockey development. Well done Carly James for being awarded with the Don Deeble Rising Star Awards which will be hosted by Sunshine Western Region Sports Club and Star Weekly.

Congratulations to Josh D’Arcy who has gained selection in the Australian School Sport Team after a blistering performance in the SSV team. Well done!

AUSTRALIAN MASTERS IN SPAIN WRAP UP
Congratulations to all the FHC Australian Masters Reps who recently completed in Spain at the Masters World Cup.

Sam Cutrale and Swampy Marsh were umpires during the tournament. 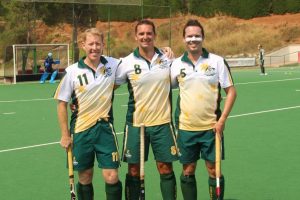