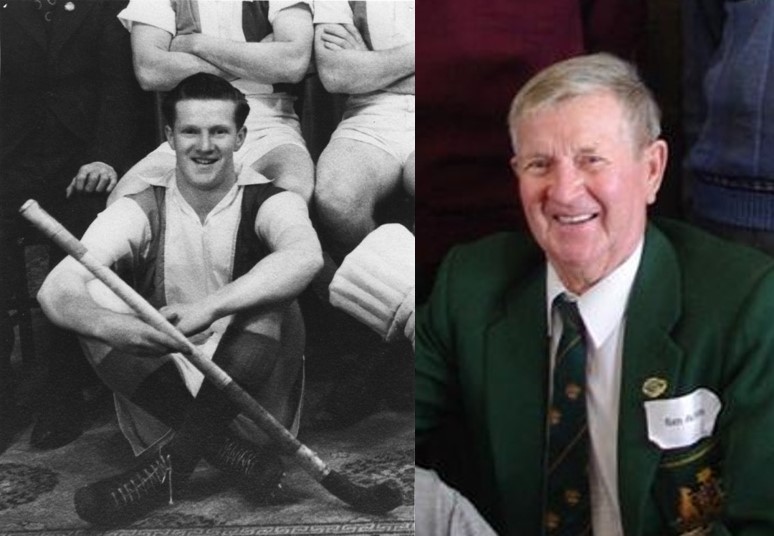 Footscray Hockey Club is saddened to hear the passing of a stalwart of the 1940’s and 1950’s. Ben passed away in his Queensland nursing home on July 10th 2020, a few days short of his 93rd birthday.
Ben was born in 1927 at Footscray Hospital and named after his grandfather. He was educated at ex-Geelong Rd State School and Footscray Technical College. Acton lived at 11 Droop Street in Footscray and then Main Road, St Albans after he married. Ben took up his grandfather and father’s trade of plumbing. He trained in the Victorian Football Association (VFL) as a young man with the Footscray Football Club (now AFL Western Bulldogs). Acton’s sister Joyce (later Joyce Wilms) encouraged him to take up both skating and hockey.

He won Best and fairest award for 10 years straight from 1947 to 1956 whilst playing for Footscray Hockey Club. Humbled by the decade of  honors, he requested not to be included in the best and fairest voting after 1956, though he remained in the team, to allow his team mates to shine. Acton coached from 1949 – 1958 at FHC, a reign that delivered two State League Premierships.

The only Australian and possibly the only man in the world, to represent his country in both ice hockey and field hockey. He captned the Australian ice hockey team at the 1960 Olympics at Squaw Valley, California, in the United States.

He was invited to the 1964 Olympics but declined because of business commitments.

He was chief ice hockey umpire at the 1956 Olympics and played field hockey for Victoria for 15 years.

Ben has kindly donated his jumper he proudly wore when representing Australia on the 1950’s to Footscray Hockey Club. It is on display in the FHC’s clubrooms in the memorabilia cabinet.

Ben last visited FHC in 2009 at the 75th Commemorative Reunion. Acton Reserve in the Footscray Gardens is named in his honour.