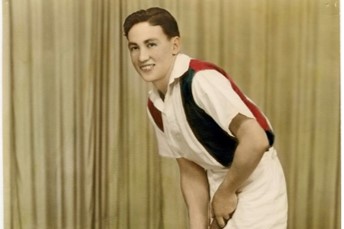 As a 15 year old Yarraville Iron Foundry apprentice in 1947, Alby Speed was ‘ready to go’ when two colleagues challenged him to come and watch a game of hockey in his local area. Alby not only went to watch, he played that day and was hooked ever more.

Little did Alby know that that day’s involvement was the beginning of a 75 year connection to his beloved Footscray Hockey Club. And with it, the following: 37 years on the FHC Board of Directors, Men’s Senior Coach for 13 years, two first XI premierships, Men’s Club Champion twice and he was the Men’s section record games holder for nearly two decades finishing on 946 games.

Alby was awarded Life Membership of FHC in 1962, and received Hockey Victoria’s Award of Merit in 1990. The Women’s Club Champion (first XI Best and Fairest perpetual award trophy) is named after Alby and more recently the F1 ground was also named in his honour.

To read the full memoriam filled with wonderful photos and memories shared by his team mates, members and friends please click on the link below.
https://footscrayhockey.com.au/memoriam-alby-speed-1930-2020/

Forever in our hearts, rest in peace our beautiful friend.