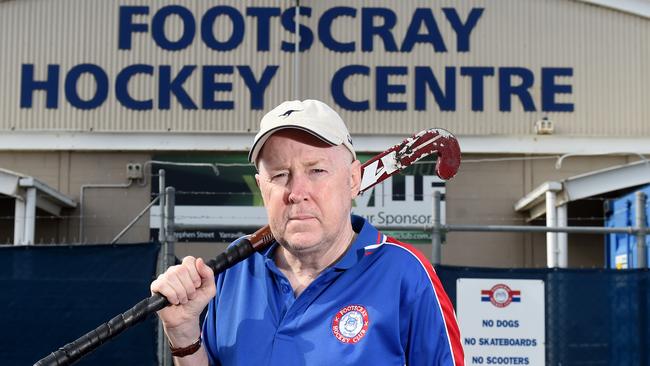 The entire Footscray Hockey Club community and beyond is saddened beyond belief at the passing of club stalwart Brendan Sheehan.
Brendan’s tireless work and efforts in building the junior section of the club to #1 in the late 2000s, progressing the club forward to achieve Premier League status and his intricate knowledge of facilities and turf field construction have been integral towards the club’s success over the last 2 decades. He had a passion for club history, memorabilia and club statistics and relished in the successes of players, teams, coaches and volunteerism.
He continued to work on the F2 redevelopment project, the Brendan Sheehan Field, until the very last days and has left a work ethic and legacy that will be difficult to replace or replicate.
Hockey Victoria recognised his life contribution to the sport with a Life Membership in 2017 and he spent most of his career working for Sport and Recreation Victoria on hundreds of sporting club projects across Victoria.
To his wife, life member Julie Anne Sheehan, daughter Ally Sheehan and brother Peter Sheehan, all avid FHC hockey members, and to the entire Sheehan family, we send our sincere condolences and thoughts during this time.
Brendan was awarded FHC life membership in 1990 and below are a summary of his achievements.
Planning & Performance Director: 1995, 2012 – 2020
President: 1995, 2012-2013
Vice President: 1977
Junior Director: 1978-79, 81, 86,-89, 03-10
Men’s Director: 19882-85, 90-93, 99-00
472 Senior Games
Men’s Coach: 1977-79, 81, 83
First XI P/Ship: (Player/Coach): 1977
Junior Coach: 40+ Years
A more detailed Memorial of his life and hockey achievements will be compiled in the near future to share with the hockey community. We would love to have as many photos or stories to share, please e-mail them to vicepresident@footscrayhockey.com.au or president@footscrayhockey.com.au