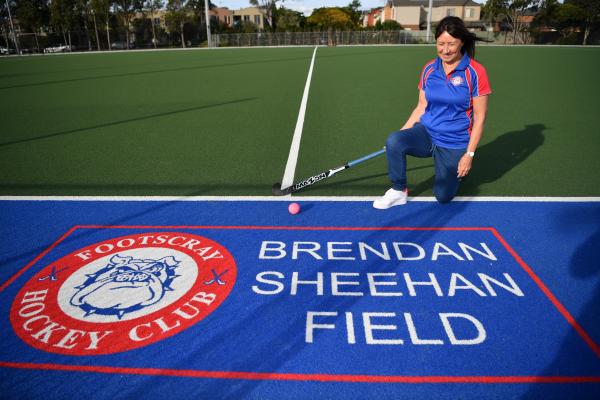 His little brother, Peter, had taken up hockey playing in the under-10s at Footscray.

Brendan, then 19, went to watch Peter play and soon had a stick in his hand.

He was soon playing hockey in a men’s lower grade team in 1972, a decision that would ignite one of the most dedicated passions in his life.

His wife, Julie-Anne Sheehan said that was the start of his involvement, which lasted “forevermore”.

“He eventually did his Phys Ed degree so he had an interest then in the training side of things, helping to get the guys more flexible and fit,” she said.

“From the early days, he was interested in making a contribution so he joined the board within a year or two.”

Julie-Anne shared the interest in hockey, also starting at age 19. She is the current women’s all-time highest games record holder for the club.

“I went down to support a boyfriend that was playing, so I was about 19 at the time, similar thing,” she said.

“I had a dancing background, played a little bit of school netball but didn’t really have a sport so to speak.

“Girls down there put a stick in my hand and said, ‘Come and play because you like running.’

In 2017, Brendan was awarded a life membership from Hockey Victoria in recognition of his contribution to the sport beyond Footscray Hockey Club.

Julie-Anne said Brendan had been diagnosed with squamous cell carcinoma, which was hard to understand as he was very conscious of protecting his skin in the sun.

Having a pitch named in his honour left a lasting legacy, she said.

“The best part of that, of course, it was named when Brendan was still alive,” Julie-Anne said.

“It was a total shock, a total surprise.

“The fact that my daughter [Ally Sheehan] and I both train on it now each week and we play games on it, it’s bitter sweet, really.

“It’s lovely to know that in perpetuity there will be something that he’s made a contribution to.

“Brendan had put a lot of work in to the grant writing groups, in to submissions and so on.

“That was his background in sport and recreation … facility planning, so it was something he was an expert at and was one of the early adopters of the notion that if we had fields in the municipality with multiple markings, they could be used for multiple events.

“Anyone that hears the words Footscray Hockey Club would immediately think of Brendan.

“Just about any person playing now, if he didn’t coach them they’ve probably come from a different club.

“Brendan coaching the juniors has spanned over 40 years.

“Brendan took an interest in the person far beyond from when he had them for that year.

“Brendan would be the sort of person that would phone the parents just to reassure them or to follow up if a kid hadn’t turned up or did they need a lift.

“He just loved the club and he loved the people and they loved him back.”